What is the Auckland City Rail Link and what will it mean for business location decisions in the future?

Capacity across the Auckland commuter rail network is set to expand significantly in 2024 when the City Rail Link (CRL) goes live, allowing for a doubling of rail capacity. The project will provide twin tunnels running 3.45km, predominantly underground, for 54,000 passengers per hour at peak travel times. This will change the way many Aucklanders travel on a daily basis, where they live and overtime, where businesses choose to locate their offices.

TwentyTwo’s Dan Longmire shares his insights on the opportunities the CRL will bring to the CBD, why Auckland so desperately needs this upgrade and what impact it will have for business leaders thinking about their future office or retail locations within the CBD. 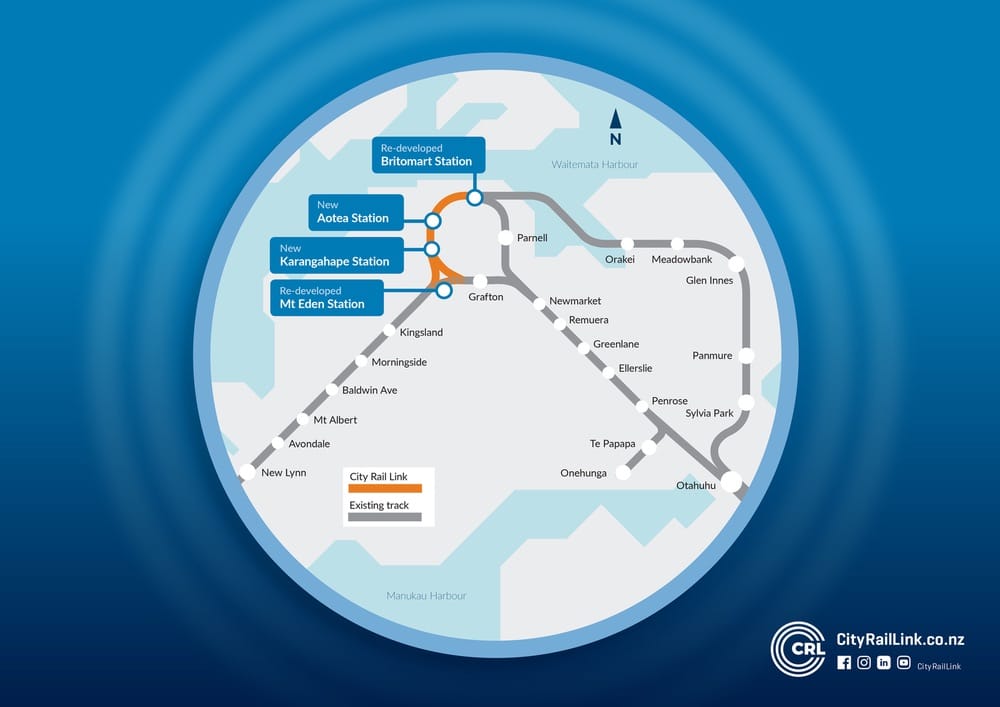 The CRL to date and what it will deliver when complete

Construction kicked off in 2016, which has effectively turned large parts of Auckland’s CBD into a prolonged construction site (the K Road and Mt Eden works are just now beginning to follow).

While disruption is inevitable with such a mammoth project, many Albert Street businesses have struggled to cope and a number of shops shutting up shop has been an unfortunate outcome to date. Despite the speedbumps (including delays, an estimated $1 billion increase of the budget in 2019 and the preferred contractor for the main body of work withdrawing their bid), the CRL will inevitably transform Britomart from a dead-end station to a thoroughfare, dramatically increasing commuter and train volumes whilst simultaneously slashing travel times.

In addition to a revamped Britomart, the CRL will see the creation of two completely new stations (Aotea and Karangahape) and a substantial upgrade of the existing Mt Eden station. Directly linking to the existing Western Line, this will notably decrease journey times, such as from the Kingsland Station to Karangahape Road (around the new station) from 38 minutes to six, an improvement in travel time of 84%!

Works have ramped up for these portions of the project – commencing in September 2019 on the Aotea station and the Mount Eden Station closed shortly after at the end of 2019, with an expected return to service in 2024.

Running in tandem, significant streetscape upgrades along K Road have also begun, aiming to improve accessibility by foot and bike to the two new station entrances and elsewhere across the fringe CBD. Some forward-thinking first-movers have already invested in the area, with Spaces (Regus) recently opening its character shared space at 501 K Road, alongside global giant Tesla’s new local HQ.

Why Auckland needs the upgrade

Existing Auckland rail infrastructure is no longer able to handle the significant growth in public transport patronage, with rail usage increasing 180% in the 10 years to November 2019 and 370% from November 2005 to November 2019, with ~1.96 million trips in November last year alone.

This far outpaces growth of overall public transportation patronage (rail, bus, rapid bus, ferry combined), which increased over the same periods 85% and 104% respectively. This rapid shift in demand for rail services has helped underpin support for the CRL, ultimately allowing construction to kick off. Without it, Auckland risks falling further into an infrastructure deficit that has clogged our streets with cars and increased commute times as the city battles with its growing pains. 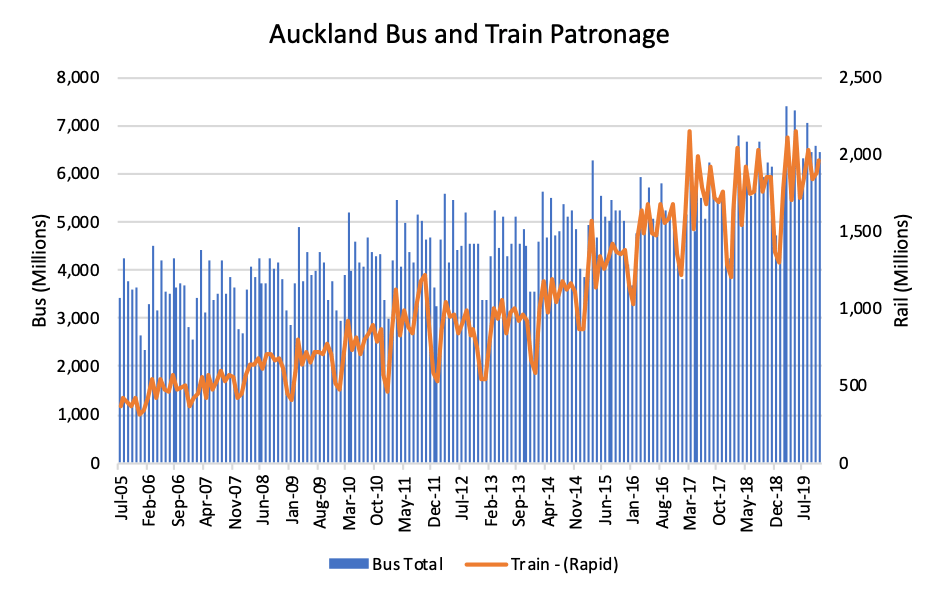 Believe it or not, Auckland ranked 112th for road-based traffic congestion in the 2018 TOMTOM global traffic index which tracks congestion levels in 403 cities across 56 countries (it’s hard to believe that there are 111 cities around the world that are worse!).

Out of the 16 cities tracked across Australia and NZ, Auckland ranked second worst, faring only better than Sydney (ranked 59th globally). While TOMTOM’s measurements showed a two percent decrease in congestion from 2017 in Auckland, the overall trend locally and globally is increasing the levels of commuters wasting time in traffic. Long commute times by car has made public transport increasingly appealing and has likely played a part in growing public transport patronage.

But what does all of this mean for the Auckland CBD office market and its occupants?

The mid-to-upper end of the CBD –  broadly defined as the portion of the CBD from Victoria Street south – has been in decline for a prolonged period, losing a number of large occupiers to the shift towards downtown.

Britomart, the Viaduct, Victoria precinct and Wynyard Quarter are absorbing the bulk of corporate occupier demand, as occupier preference shifts towards the water and the west of the CBD. This, in turn, has been reinforced by the overall low quality of stock in the midtown area, with limited prime options and with the bulk of the city’s secondary stock. With better connectivity, amenity and a general shift in location preference, tenants have moved elsewhere and developers have had little reason to engage in new build or refurbishment activity as demand trailed off. 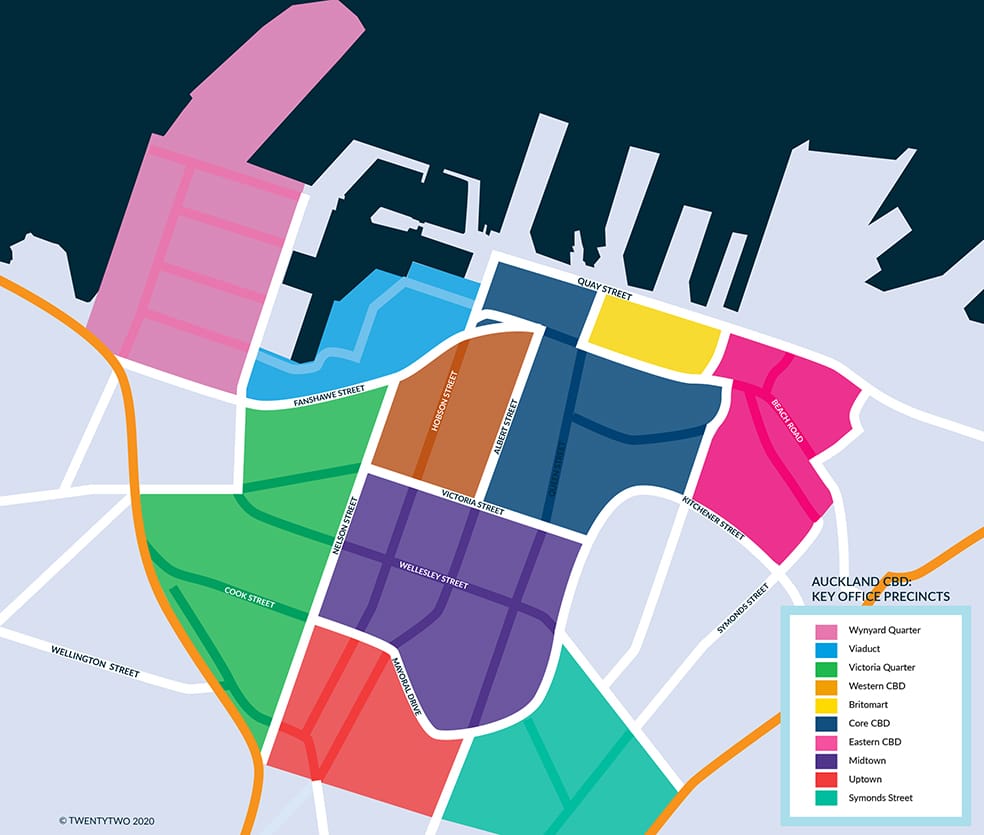 The CRL is set to help reverse this shift, driving new development and refurbishment activity to provide occupiers with high-quality options in areas that have seen little action in the office sphere recently.

Projects entering the development pipeline have been steadily increasing, including a number of schemes underway, in planning or proposed along Albert Street. This includes a large, mixed-use tower at the current Food Alley site and Mansons ~30,000 sqm proposal at 50 Albert St.

Accompanying this is hotel and residential development, including the 37-level Voco/Holiday Inn Express tower at 58 Albert St and the 41-level hotel and apartment project at 51 Albert, both underway.

This is accompanied by a growing number of new developments further away from the water, including Love and Co’s proposed mixed-use development on the doorstep of Aotea Square and the 41,000 sqm of proposed mixed-use space above the Aotea Station, both of which are touted to contain a substantial office component.

A high concentration of secondary buildings has helped keep a lid on rental rates and have underpinned higher vacancy in the Aotea area when compared with other CBD sub-precincts.

With completion still at least three-to-four years off, we are yet to see a substantial shift in occupiers looking to locate in and around the Aotea area, although it is on the horizon. With staff accessibility becoming increasingly important and with options closer to the water being limited and comparatively expensive, we believe demand will increase closer to the station completion date.

This in turn, we expect, will drive rental growth (from better quality stock), firm vacancy rates and spur additional development activity in the long term, with a lack of prime options across the CBD acting to funnel occupiers into new and refurbished spaces around the Aotea station. 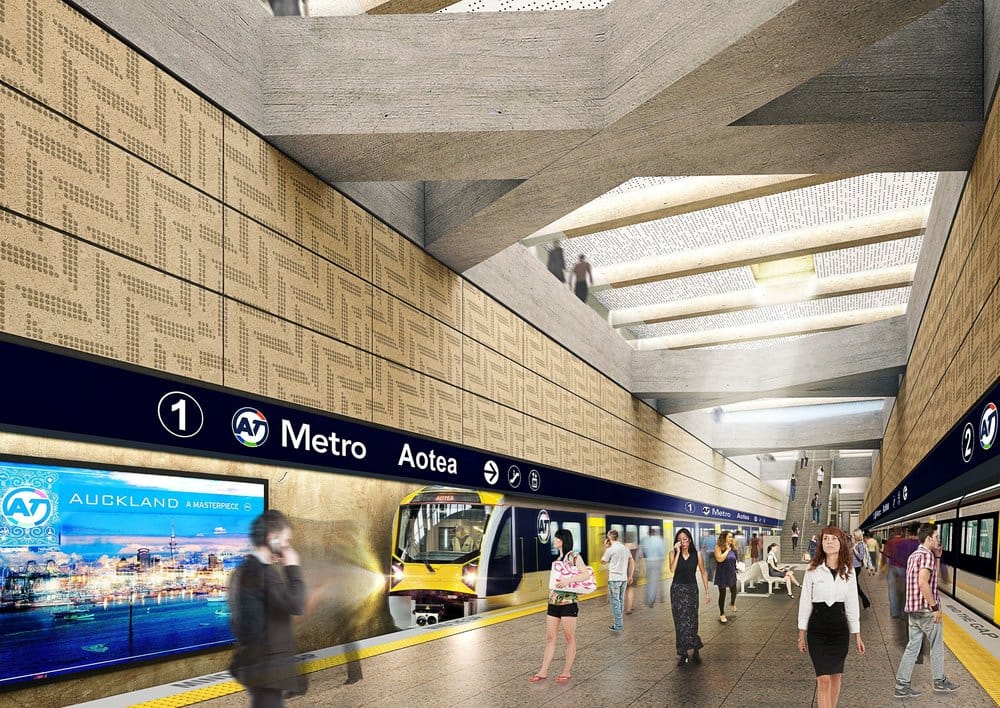 It’s not just office occupiers that will drive this resurgence. Residential, retail, accommodation and entertainment uses are also expected to stimulate development and gentrify the area.

Work is well underway on the CAB apartments, converting the former Council HQ and New Zealand’s first high-rise office into high-end apartments, due for completion in 2021. Accompanying this is the underway conversion of a 12-level office building to 92 high-end apartments at 369 Queen St by Conrad Properties, the proposed new performance/arts hub Aotea Studios by Regional Facilities Auckland and a proposed large-scale mixed use development by Love and Co on Aotea’s doorstep (as noted).

Outside of the CBD, the CRL will create a number of opportunities for developers and occupiers alike. The CRL team are expecting 100,000sqm of mixed use space to be created on land purchased for construction immediately surrounding the Mt Eden station, part of which they expect to be office. Improved access for both employees and clients will make occupying a fringe or decentralised office location more appealing for occupiers, likely growing demand for space in areas directly benefiting from the CRL outside of the CBD.

Overall (and over the long haul), the delivery of the CRL will be positive for occupiers. Once operating, it will greatly improve access to a portion of the CBD that has been neglected in recent decades, creating new opportunities for tenants by way of both refurbished and new build stock.

With such pressure on existing prime stock elsewhere in the CBD, new development activity spurred by the CRL around the Aotea station will help to alleviate pent up demand and provide office accommodation with greater connectivity and variety.

The expected savings in public transport travel times brought on by the CRL will also likely act to increase density in the suburbs directly impacted over time. While it’s too early to tell exactly how this will manifest outside of the CBD, we expect it will likely mean more apartments and denser housing in suburbs enjoying improved travel times to the CBD and business hubs around the CRL stations. This increased residential density will, in turn, provide a larger pool of labour for centrally-located businesses to pull from.

While the major physical impacts are yet to take shape, change is coming that will impact occupiers, developers and the trends currently shaping the CBD office market. With a $4.42 billion price tag and greatly increased accessibility across the CBD, the impacts of the City Rail Link will change the way Aucklanders live, work and play for years to come.

The idea of an underground rail system in Auckland is nothing new. However, the concept has never gained enough traction to get off the ground. Originally surfacing as the ‘Morningside Deviation’ in 1923, then Railways minister Gordan Coates put forward a city-to-Morningside underground line.

At the time, the estimated project cost was  £400,000 which, according to RBNZ, is equivalent to a relatively meager $41 million in 2019 dollars. The project did not draw sufficient support and was subsequently shelved in 1930. It is likely that this decision played a large role in shaping the Auckland we know and see today. Why would we say this? I’m glad you asked. It’s because of the ‘Marchetti Constant’.

The Marchetti Constant, devised by Italian physicist Cesare Marchetti in 1994, explains that people are willing to commute for roughly half an hour each way from their homes to work. This interesting phenomenon has been demonstrated time and time again throughout history as transport technologies have evolved. And by ‘history’, we really mean for quite a long time. For example, compare ancient Rome, a ‘walking city’, reaching not much further than a 3.2km diameter, with London then a prime example of a ‘rail road city’ in the 1800’s.

Following this is then Chicago, with the introduction of light rail street cars in the early 1900’s, stretching further to a 13km diameter.

The most recent transport technology advancement was the introduction of modern motorway systems, which allowed rapid expansion of city limits from the 1950’s onwards. In all of these cases, the Marchetti Constant has proven to be a reasonably accurate. In short, people like to be fairly close to where they work. 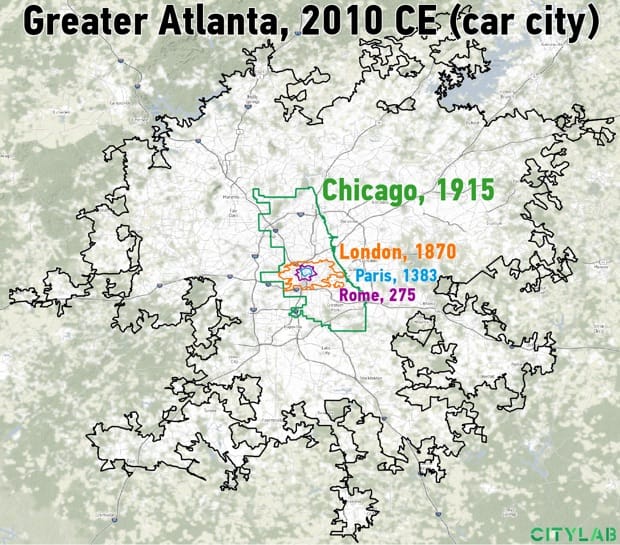 Before the congestion problems of today, commuters could live substantially further from the central business areas and commute via car to their place of work within this 30-minute boundary.

While all are international examples, if the Marchetti Constant is correct, Auckland’s urban fabric would be much different today had the Morningside Deviation gone ahead.

Fan of a G&T and a good platter. Travel obsessed (budget permitting). Loves getting outdoors on a bushwalk or the boat. Documentary addict.

Dan joined the TwentyTwo team at the end of 2019, bringing with him five years of experience in the commercial property market.  Based in Auckland, he has a passion for data analysis and using that information to help clients make better property decisions.  Dan provides our clients with advice and insights on the commercial property market; needs analysis/briefing, stay-go decisions, new leases/lease renewals, rent reviews, portfolio management and a wide range of issues associated with managing large property portfolios.